At our recent office launch I conducted a test with our visitors. In the playroom, where we demonstrate products to potential clients, I setup a PC with a 400 Mb/s line straight to the internet. No router or firewall just public IP straight to the internet. What I wanted to see was how fast general internet users found it and whether the talk on super fast broadband in the UK is relevant.

Obviously being an uncontended 400 Mb/s line to the internet we needed a fast PC to keep up with it. Interestingly the small PC I tried first (2 GB RAM, 2 GHz Atom Processor) couldn’t even get the line past 100 Mb/s, so I swapped it out for a much faster machine (4 GB RAM, 4 Core 2.6GHz Processor). Then came the problem of actually finding something on the internet to test with. FTP and general downloading came nowhere near maxing out the line and I had to resort to multiple simultaneous tests to see close to 400 Mb/s. So no matter how fast your line is, if the other end you are downloading or sending data to isn’t fast enough you won’t be able to use all the available bandwidth.

So after testing with the line I asked the visitors to put their name next to the statement they most agreed with:

Does the internet feel faster to you?

Firstly I think the result for the last statement came from our hosting partners who regularly work with 1 Gb/s plus lines… so I will discount those. The people who thought it was slightly faster or the same mainly were office staff who would use their office connection to do the majority of their web based activity. I think the key point is that with 400 Mb/s it should have been a walk over with everyone choosing the 100 times statement but that was less than 20%.

In terms of strategy for the country it is only really the TV companies such as Sky who need high speed access for their latest services. So they should be able to make a business case for that, but for the industry as a whole, I believe focus on good speeds for all and increasing reliability should remain the key drivers. 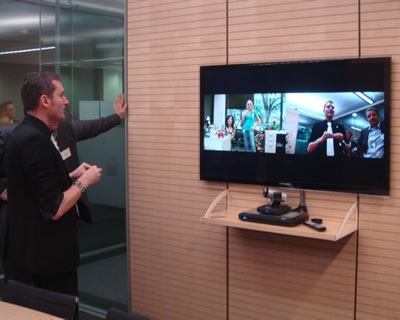